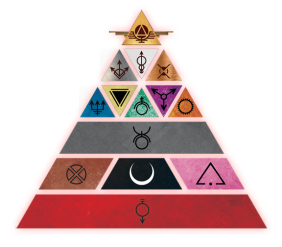 Morning Star begins with our hero Darrow being tortured in a box. This has been te case for about a year. Victra has been tortured by her half sister Antonia. Everyone in the solar system thinks Darrow is dead because the Sovereign stages a mock execution of some poor slob made up like Darrow. Everyone but Sevro – who never stopped believing. He is possibly the most interesting character in the books. Sevro sends Holiday and Trigg ti Nakamura to rescue Darrow and they get Victra as well but Trigg is lost in the battle – killed by Aja – She is a beast.

Mickey (the carver) is brought back to fix Darrow and Victra. I was disappointed that Mickey’s character was not developed more as he is the key to this whole saga. Oh well. Once they are well they set off to kidnap Quicksilver (a rich gray). They arrive to find Mustang, Antonia, and Cassius in a peace conference with Quicksilver. After a battle, they capture Quicksilver and find out that he was a co-founder (with Fitchner) of the Son’s of Ares. Next up – Sevro and the howlers serve up a distraction on Phobos while Darrow and Ragnar head to Ragnar’s home to try and enlist the Obsidians in their battle. Along the way they are met by Mustang who joins them. Aja and Cassius follow them and both ships crash land. Darrow and Mustang caputure Cassius. Aja kills Ragnar (hard to believe) and then escapes.

Darrow and Mustang then convince Ragnar’s sister Sefi to join their cause. They do this by unmasking the Gold’s in the temple who are pretending to be gods. Sefi beheads her mother, Alia Snowsparrow, when she disagrees with Sefi. There are a lot of themes about parent and child relationships in this series. Mostly bad ones.

Next they convince Romulus au Raa, one of the moon lords of Jupitor, to align with them over a counter offer by Rogue representing the Sovereign. So the big space battle commences. Pierce Brown is no Alistair Reynolds when it comes to space battles but this one is interesting. Darrow suckers Rogue in close thinking he has won and then Darrow and a team of reds take clawdrills across and tear straight to the bridge of Rogues ship (helped by Rogue’s Pink). Antonia escapes leaving Rogues fleet exposed. Rogue sees that all is lost and despite Darrow’s pleas for his to comeback to his side. Rogue commits suicide. Noble and poetic to the end. Victra captures Antonia. Sevro stops an uprising of the obsidians who are hanging every Gold in sight. He does this by first hanging Cassius for killing his father (Fitchner) and then (dramatically) hanging himself for his various murders. Sefi cuts them both down and unites the obsidians (once again) under Darrow. Sevro and Victra are married. Their kids will be demons.

Before the final battle Darrow suggests letting Cassius go as someone is bound to kill him. As he and Sevro and Mustang are doing this Cassius steals Sevro’s gun and kills him. He lets Antonia go and they steal a shuttle and take Darrow, Mustang, and Sevro’s body (why?) to the Sovereign Octavia who is there with her grandson and Adrius (the Jackal). Octavia orders Darrow’s right hand to be cut off. This is done. Octavia orders Aja to kill Antonia because she fled the battle and left Rogue outflanked. Adrius plans to kill Darrow with Sevro’s gun (why?) and discovers that it is full of blanks. Cassius then reveals that he is actually on Darrow’s side after all. They fight Aja until they get in position to awaken Sevro (right Sevro is not really dead – big surprise). Together they are able to defeat Aja and kill the Sovereign.

Then Adrius (that Jackal) has one more curve. There are 100 nukes on Luna and he will set them off one by one unless Darrow commits suicide and Mustang and Cassius let him assume the throne.   Lilath is the button pusher in her space ship. Instead of killing himself Darrow punches Adrius in the throat and rips out is tongue (Sefi is envious) . With the help of the Ash Lord they pummel Lilath and prevent her from setting off all of the Nukes.

Mustang becomes the sovereign and Darrow is her consort? Husband? Cassius takes Lysander off to explore the solar system. Sefi is off to unite all of the obsidians (trouble brewing). Everything tied up very nice if you ask me – but wait. What was Mustang doing during that year that Darrow was being tortured in a box? Having a baby apparently. She introduces Darrow to his son – Pax. Now everything is tied up nice and pretty. I think Eo would be happy – Bear the Chains.

A good book along the lines of Hunger Games. A much bigger geography with the whole solar system. While not many space battles there are some terrific moments such as when Darrow and the Reds take the clawdrills into Rogues ship. A lot of vicious politics, which is fun. Some of the situations escape belief but that is nature of these sorts of novels. I liked it a lot and recommend it.