OSU – Clemson: Ohio State’s O-Line and D-Backs will be Challenged 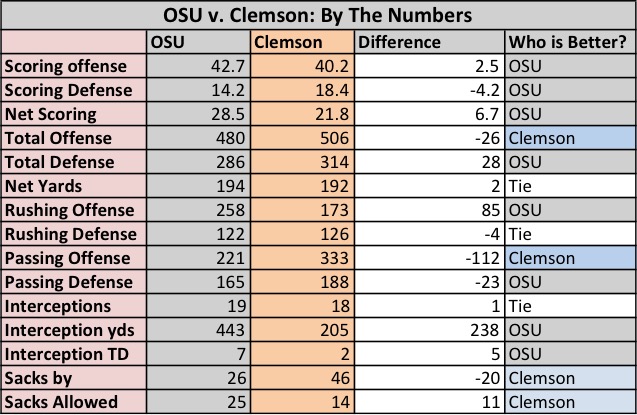 The two areas that I think will be challenged the most will by Clemson are the OSU offensive line with pass blocking and the defensive backs by a talented QB – Deshaun Watson and a strong receiver core led by Mike Williams.   Vic Beasley is gone to the Falcons but the front line of Dexter Lawrence, Christian Wilkins, Jabril Robinson, Clelin Ferrell, and Carlos Watkins have piled up 46 sacks.

Barrett makes things happen on broken plays but he also holds the ball too long and is a set up to take a sack if the o-line does not give him the time he needs.  OSU needs to start off with some quick short passes but then needs to extend the field vertically to open things up for Samuels and Weber.  If they are able to do that then watch out for big yardage on the QB draw.

On the other side of the ball, our Defensive backs led by Conley and Lattimore at cornerbacks, need to contain the short yardage plays without giving up the long pass.  That is going to be tough.  Our linebackers need to help out across the middle and the D-line needs to put pressure on Watson to hurry his throws and get those INT’s that were difference makers against Michigan.  If we don’t – it will be a long day.

Our special teams are a source of concern.  Cameron Johnston is a terrific punter for yardage but his technique makes him a target for blocks.  Our protection for punts and FG’s is suspect.  The coaching decision to try a fake punt deep in our own territory almost cost us the game.  We cannot afford any miscues on special teams.

Someone is going to have to step up and have a better then expected game for us to win.  I look for two areas to improve.  Defensive line.  We started to see them control the game in the second half against Michigan.  If they can get that kind of penetration against Clemson then Watson will have a long day.  The other performer is Mike Weber.  He has 100+ yes this year but has been second fiddle to Curtis Samuels lately.  Samuels will have a big game no doubt – but I think Weber is ready to bust lose.  Maybe not for big overall yards but for some significant plays when we need them .

Stay tuned for my prediction